Harley and Brianna: Upper Iowa Training Club show October 27th, in Decorah, Iowa. She entered two shows that day. She received 97 out of 100 points in both Novice Rally runs. The judges were Barbara Wedekind-Shelton and Robert Burgin.

Brianna showed again the next weekend at the Coulee Kennel Club show and got 97 points under Judge Ronnie Bizer to finish their Novice Rally title. She moved up and received 95 points the next day in Rally Intermediate under Judge Anna Lorenz. She was a little disappointed that she didn’t place, but realized she still received a leg.

She has put his CGC title on him and his Novice Trick Dog title also. Harley & Brianna have a true bond. So proud Team Harley. Brianna says she is so blessed & thankful she has Harley.

So proud of this spectacular team. Each of her classes were some of the largest at the show, with her & Harley excelling in all of them. She is already making plans for the next year’s classes. (Pictures to follow!)

Thanks again for this handsome boy. His temperament is awesome. Great addition to their family! 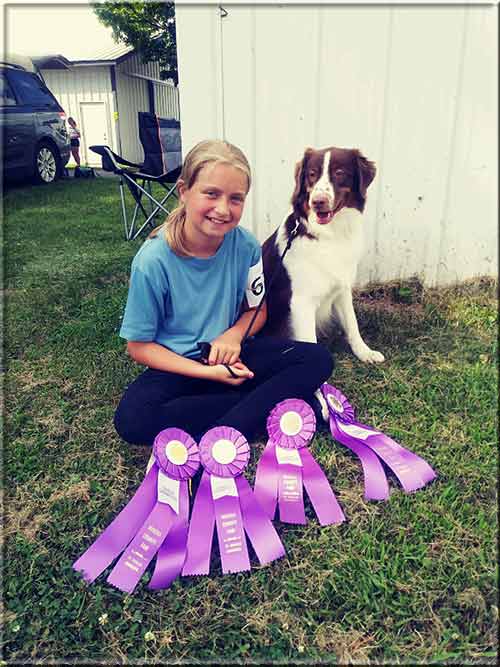 Am writing to give you joyous news on Brianna & Harley. The Winona County 4-H dog show was yesterday. All Grand Champion ribbons in the dog project so far. Agility will follow in about two weeks.

Am so proud of this team. Brianna works hard & Harley is loving every minute of it. He can be a challenge sometimes, but for a 10 year old Brianna handles him well. He adores her, you can see it when they are working or playing. Can’t wait to see how agility goes. Will keep you informed.

Thanks again for this lovely boy. 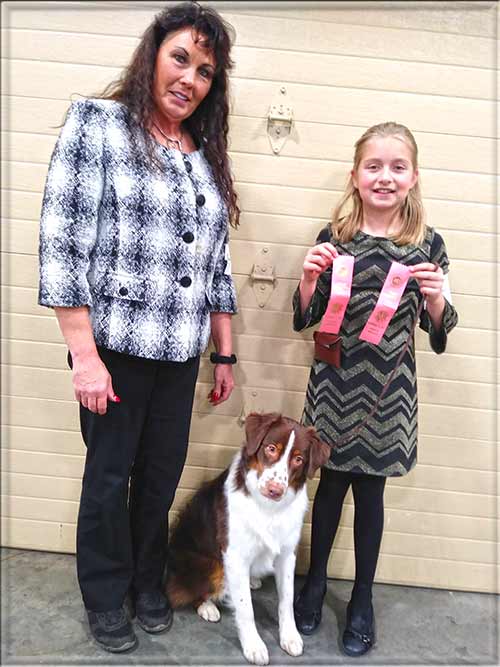 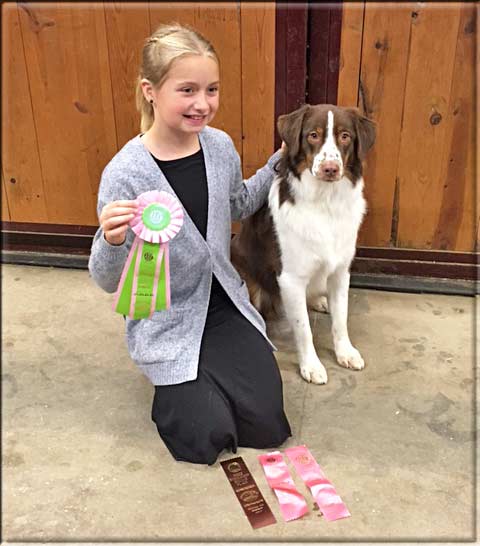 Great weekend at the Coulee KC Show near Winona, MN. November 3rd, 4th and 5th. Brianna and Harley entered the “B” Match Friday night. Team Harley a FIRST place in Novice, then on to BEST JR HANDLER over several intermediate & one senior participant. Did an awesome job!!!!

Her first class was Rally. She & Harley got 96 out of 100. Points off for tight leash, otherwise perfect, did the course very well. SO proud of their performance. Received a BLUE, only 2 points away from the grand champion placing in a class of 19.

Second class was the foundation obedience class. Another great performance for such a young team. Harley got distracted by all the noise, other dogs & movements in the building. Brianna regained her & Harley’s composure & completed the exercises well. She again received a BLUE in the upper third of a class of 21.

The afternoon was her Novice showmanship class. They divided the group in half. Team Harley made the first cut, The judge gave them a workout. First the down & back, then questions re: your dog. Then the “L” pattern, some more questions and finally a “triangle pattern” with more questions. Brianna & Harley did AWESOME. Harley handled well & Brianna knew the answers to the questions. Again so proud of Team Harley. Now off to the staging to receive the placings. Watch all the kids get ribbons starting from the bottom up. Got down to a little boy with a sheltie, another girl with a sheltie & Team Harley. Our hearts were all fluttering. Award of Excellent to the other little girl, Reserve Champion to the little boy & GRAND CHAMPION to Team Harley. She was so excited, got her ribbon & plaque & proceeded to hug Harley. Mom had tears! I am so proud of their performance & how well they did. Practice paid off.

Harley was admired by many spectators. Many stated how pretty he was & his beautiful temperament and calmness. Several people asked about his focused attention on Brianna & couldn’t believe how old he was. He even fell asleep on the bleachers while waiting for their ribbon placement. They asked where we got him & if you raised many dogs. Gave them your info & Kennel name. You would of been proud of this little boy.

Thanks again for breeding such an amazing boy. Brianna is now preparing for Junior Showmanship in AKC. Has been attending handling classes with the hope of starting at the Coulee show in November. We will see if they are ready for that ring.

Thanks again for such a wonderful boy that Brianna & Kyleigh adore. (Mom & Dad like him also just don’t always like to admit it!). Hope to see you soon at another show.

HARLEY IS A BAILEY / JACK OFFSPRING.

Wins are from the

This is Breanna’s first year in regular 4H

WATCH FOR BRIANNA AND HARLEY IN THE SHOW RING!!!