ANOTHER WIN FOR TYSON!! 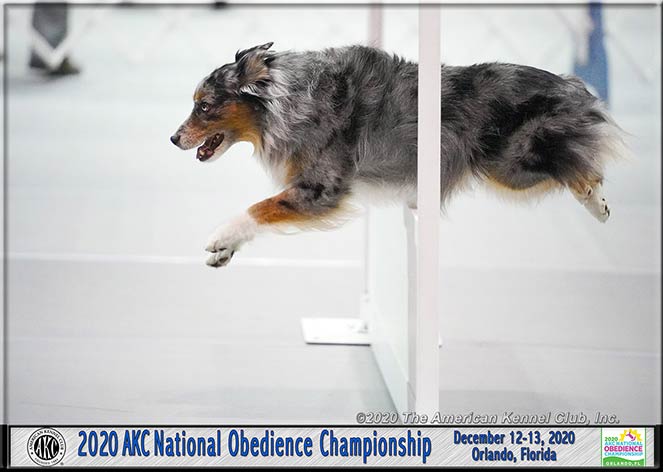 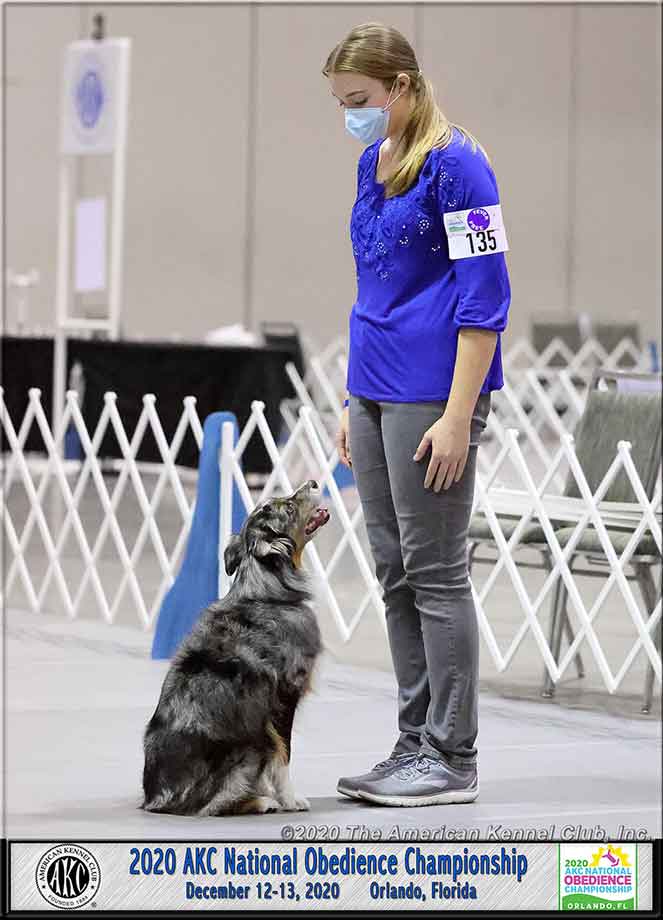 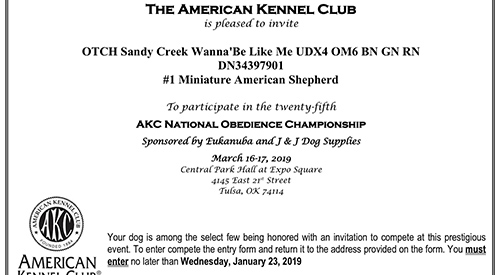 OTCH SANDY CREEKS WANNA BE LIKE ME UDX4 OM6 BN GN LOVINGLY KNOWN AS (TYSON) IS THE NUMBER 1 MINIATURE AMERICAN SHEPHERD, ACCORDING TO AKC!! A HUGE CONGRATULATIONS TO THIS VERY YOUNG TEAM. AS TYSON’S BREEDER ALL I CAN SAY IS MY HEART IS FULL AND RUNNING OVER. I REMEMBER THE DAY MARA (WHO WAS 9 YEARS OLD AT THE TIME) AND HER MOTHER SHANNON CAME OUT TO OUR FARM TO SHOP FOR A PUPPY. WE DECIDED THAT TYSON WOULD BE A GOOD FIT. BOY WAS HE EVER. TOGETHER AS A TEAM THEY ARE NOTHING SHORT OF AMAZING. TYSON IS THE ONLY MINIATURE AMERICAN SHEPHERD TO HAVE HIS OTCH TITLE. LAST YEAR TYSON AND MARA TOOK A SECOND AT THE NOC, THIS YEAR THEY WON IT AGAINST SEASONED HANDLERS. THEY WERE ALSO INVITED TO THE WESTMINSTER KENNEL CLUB SHOW AND TIED FOR THE WIN IN ONE OF THEIR CLASSES. THIS WOULD BE A GREAT ACCOMPLISHMENT FOR ANYONE, BUT MARA IS ONLY 16 YEARS OLD. EVERYONE HERE AT SANDY CREEK IS SO PROUD OF YOU MARA. YOUR DEDICATION TO YOUR LITTLE BLUE DOG AND YOUR SPORT IS AMAZING!! WE WISH YOU THE VERY BEST IN 2019.

Mara and Tyson at Westminster

Mara and Tyson competed in the Westminster Masters Obedience against 24 other outstanding teams of NOC Champions and OTCH dogs. The competition consisted of 2 parts: The first being an obedience run with a total of 200 points possible. Mara and Tyson tied to lead that section of the competition with a 196. The next section was a freestyle competition where they performed a very correct display of obedience while Tyson also displayed some of his tricks as a circus dog. Overall the team did amazing, placing 6th. An amazing accomplishment for a 15 year old and her self-trained dog!

Thank you Wanda and Sandy Creek Aussies for all of your support and promotion of this young and up-coming team and for raising this amazing display of the versatility of the Miniature American Shepherd. Tyson is a TRUE testament to the TOP NOTCH breeding program Sandy Creek Aussies is so well known for!

MARA WACKER AND SANDY CREEK’S WANNA BE LIKE ME LOVINGLY (KNOWN AS TYSON) ARE HEADING TO THE WESTMINSTER!!!!!!! MARA IS A WHOPPING 15 YEARS OLD. WHAT AN ACCOMPLISHED YOUNG LADY. WE ARE ALL SO PROUD OF THE YOUNG TEAM. GOOD LUCK !!! 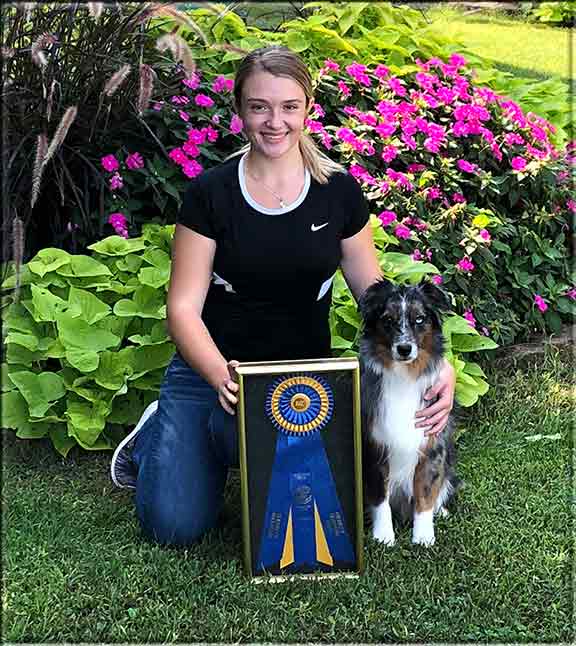 At the Des Moines, Iowa, Tyson won utility B both days, in very tough classes. Today, he won HIT with a 198.5! 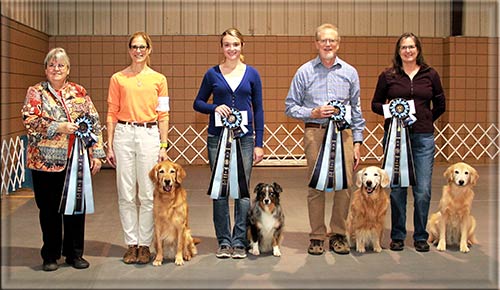 Here are some pictures from the Region 10 NOC qualifier, which is an additional qualifying route to the National Obedience Championship in march.
Tyson was already qualified, because he’s the number one mini in Obedience, but still was fun! We were second overall, in a very impressive line up of experienced handlers and dogs!! 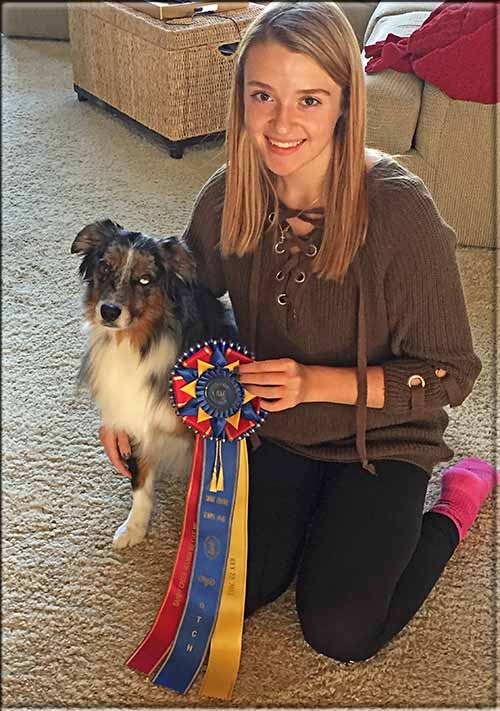 Mara Wacker and Sandy Creeks Wanna Be Like Me (TYSON) received their OTCH title at the AKC show in Sioux Falls, South Dakota the weekend of July 22-23, 2017. They were also HIT with a 198 1/2, and HC. They won both open and utility to finish our OTCH.

Tyson is also the Number 1 MAS in Obedience rankings for the 2018 National Obedience Championship in March. He is the first Miniature American to receive this title since we have become known as MAS. CONGRATULATIONS TO THIS AWESOME TEAM!!!!! THIS IS QUITE AN ACCOMPLISHMENT FOR SUCH A YOUNG DUO. They purchased Tyson from me when Mara was only 9 years old. All I can say is WOW!!!!!!!!!!!! Mara your commitment and dedication to Tyson has paid off. Job well done!!!!

Mara and Tyson trained with Chucki and Gary Gatz of EZ dog training in Hutchinson MN, and Audrey Peterson of Litchfield, MN

I would like to say a BIG THANK YOU to these trainers who made this possible. And to (Mom) Shannon who made sure Mara got to her training classes.

SANDY CREEKS WANNA BE LIKE ME EARNS HIGH SCORES!

MARA AND SANDY CREEKS WANNA BE LIKE ME (TYSON) AT OUR 2016 MINI NATIONALS
won highest scoring mini in advanced rally level, high in trial obedience dog, high in level open obedience, and highest scoring mini all trials combined obedience. They also won first place in open with a 198/200, and won rally with a perfect 100! Mara was also the ultimate junior handler 12-14, finished 9th in mv-mas with only two scores. They were 11th in the ultimate mini Aussie placing as well.

MARA GOT TYSON FROM ME WHEN SHE WAS 10 YEARS OLD.
SHE HAS DONE AN OUTSTANDING JOB TRAINING TYSON. THEY ARE BEST FRIENDS AND AN AMAZING TEAM. TYSON LIVES TO PLEASE HIS GIRL. I SEE A GREAT FUTURE FOR THESE TWO. CONGRATULATIONS ON YOUR BIG WINS AT NATIONALS!!!!!!

Hello!! Wanted to share our results from the juniors Classic at the AKC Eukanuba championship! Mara and Tyson did you well winning the preferred open titled obedience and novice rally!! I will send professional pictures when we get them but wanted to share this with you! He’s an amazing little dog and lives to please his girl!! They will go down as the first’s Miniature American shepherd to win these classes! Yeah!!! 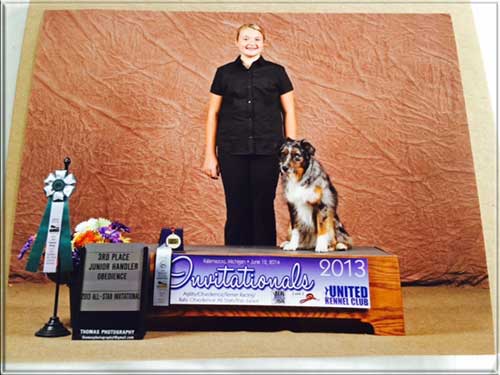 This is their third in Junior Obedience 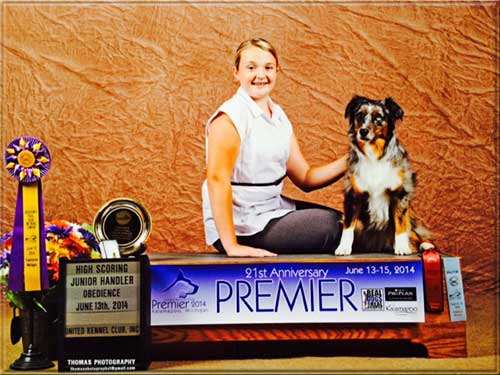